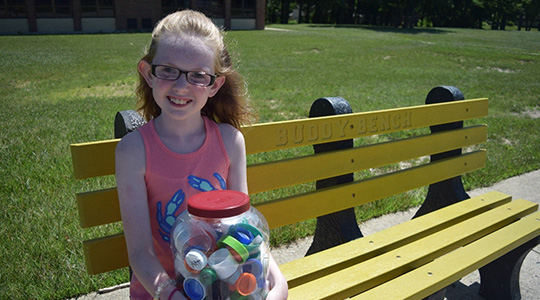 Sometimes making friends can be hard. If you move to a new school or you're meeting a new student, it can be hard to go up to people you've never met. Luckily, 7-year-old Christian Bucks designed a solution to this problem! In 2013, he created the first "Buddy Bench" to help his classmates that were having trouble during recess. If a kid sits on the "Buddy Bench", other kids on the playground know they are looking for a friend to play with! Since the first "Buddy Bench" was built at Christian's school, many other schools have added their own benches. A 9-year-old named Sammie Vance heard about "Buddy Benches" and decided to brainstorm a cheap way to make one for her school.

Sammie's mother learned about a company that turns recycled plastic caps and lids into benches, and Sammie thought that would be a great way to make a bench! Sammie met with her school's principal, drew her design, and made a video to tell her classmates about the project. With help from the school and her community, she collected over 1,600 pounds of bottle caps! They received caps from every state in America, as well as from Africa, Israel, Germany, and the Netherlands. They collected enough plastic to create three "Buddy Benches" for her school! Sammie is now helping other schools that want to build "Buddy Benches." She hopes that someday every playground will have a brand new "Buddy Bench of their own.

How could you help build a "Buddy Bench" in your school? Show us your ideas in the design section!